The following appeal was made to Minister for Urban Affairs, Hardeep Singh Puri and Delhi chief minister, Arvind Kejriwal by Manushi on the eve of 344th anniversary of Shri Guru Tegh Bahadur Ji’s martyrdom which took place on 24th November 1675.

As you well know, the sacred site of Shri Guru Tegh Bahadur Ji’s martyrdom is in Chandni Chowk area and is today known as Sis Ganj gurudwara.

Fortunately, the entire Chandni Chowk area which had become a symbol of urban chaos is currently undergoing a major redevelopment program. We consider it a great blessing that the project for rejuvenation of Chandni Chowk took off as an offshoot of a PIL filed by MANUSHI in the Delhi High Court way back in 2006. The PIL itself was part of a long-drawn advocacy campaign launched by MANUSHI in 1996 to press upon the policy makers and administrators of Delhi to stop their war against Non-Motorized Vehicles. Thousands of these humble eco-friendly vehicles were routinely confiscated every month and sold as junk by municipal agencies –all because they were treated as an unwanted nuisance and denied due to legal protection.

Among other things, our PIL had demanded that instead of crushing cycle rickshaws and bicycles, government ought to provide dedicated NMV tracks to promote rickshaws and bicycles as an eco-friendly mode of short distance commutes in order to cut down the use of motor vehicles which are choking our cities with poisonous fumes.

However, since the Chandni Chowk area hosts several historic sites, it has thrown up a few problems which merit your personal attention and intervention.

To begin with, the entire plan of the Chandni Chowk Redevelopment is focused around recreating and celebrating, in a modernist idiom, the grandeur of the Mongol heritage from the Red Fort to Fatehpuri Masjid. Those handling this project, or even the experts of the Delhi Urban Arts Commission who have held up the project for months on end to ensure that the Mongol heritage is preserved in its “pristine purity”, have not shown equal awareness of two very important sacred sites in the Chandni Chowk area, namely the Sis Ganj Gurudwara and Bhai Mati Das Museum. The area between them was named the Fountain Chowk to honour a waterless fountain standing there as a clumsy relic of British raj. 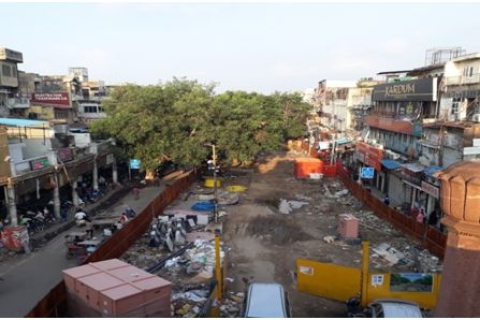 The importance of these sacred sites has been deliberately diminished in popular memory through partisan state policy. Here is a brief summary for the benefit of those who have forgotten what Sis Ganj Gurudwara and Bhai Mati Das Museum situated in the middle of Chandni Chowk represent.

In May 1675, a group of Kashmiri Brahmins came to seek Guru Tegh Bahadur ji’s help in stopping the onslaught of forced conversions of Hindus ordered by Aurangzeb. Guru Tegh Bahadur decided to stand up for the freedom of his people to stay within the fold of their own faith and sent a message to Aurangzeb that if he could first convince Guru Tegh Bahadur to become a Muslim, then the Brahmins would also convert.

After his promise to Kashmiri Brahmins Guru Tegh Bahadur nominated young Gobind Rai (later known as Guru Gobind Singh) as his successor and on 11th July 1675, he left Anandpur for Agra to confront Aurangzeb at his durbar. He was accompanied by three companions, Bhai Mati Das, Bhai Sati Das, and Bhai Dayala.  They all knew they were courting death by joining their Guru.

Bhai Mati Das and Bhai Sati Das were born in a Brahmin family of the Chhibber clan in village Karyala, in the Jhelum District in Punjab, now in Pakistan. Their grandfather, Bhai Praga, had become a follower of Guru Har Gobind and had taken part in battles with the Mongol forces.

Bhai Dayala was 15 when he joined the Guru's sangat. His ancestors belonged to Alipur near Multan. His grandfather, Bhai Balu Ram, had attained martyrdom while fighting in Guru Har Gobind's first battle of faith against the Mughals.

All four were arrested en route and taken in chains to Delhi and locked up in prison from July to November 1675. During their incarceration, Guru Tegh Bahadur and his three companions were starved and tortured mercilessly. When these brutalities did not result in their yielding to conversion, Aurangzeb ordered that Guru Tegh Bahadur be beheaded. To test his resolve further, Aurangzeb told his minions to first slaughter the Guru's companions before his eyes, hoping that the sight of their suffering might shake Guru Tegh Bahadur’s resolve and pressure him to save himself by agreeing to embrace Islam.

Bhai Mati Das, chosen to be the first martyr, was led out in chains under heavy guard. The spot fixed for his execution was the Kotwali. He was tied between two erect flat logs of wood and sawed alive from head through torso till he bled to death. Despite such an agonizing death he refused to convert and kept chanting Japji, a prayer composed by Guru Nanak ji, till his last breath. 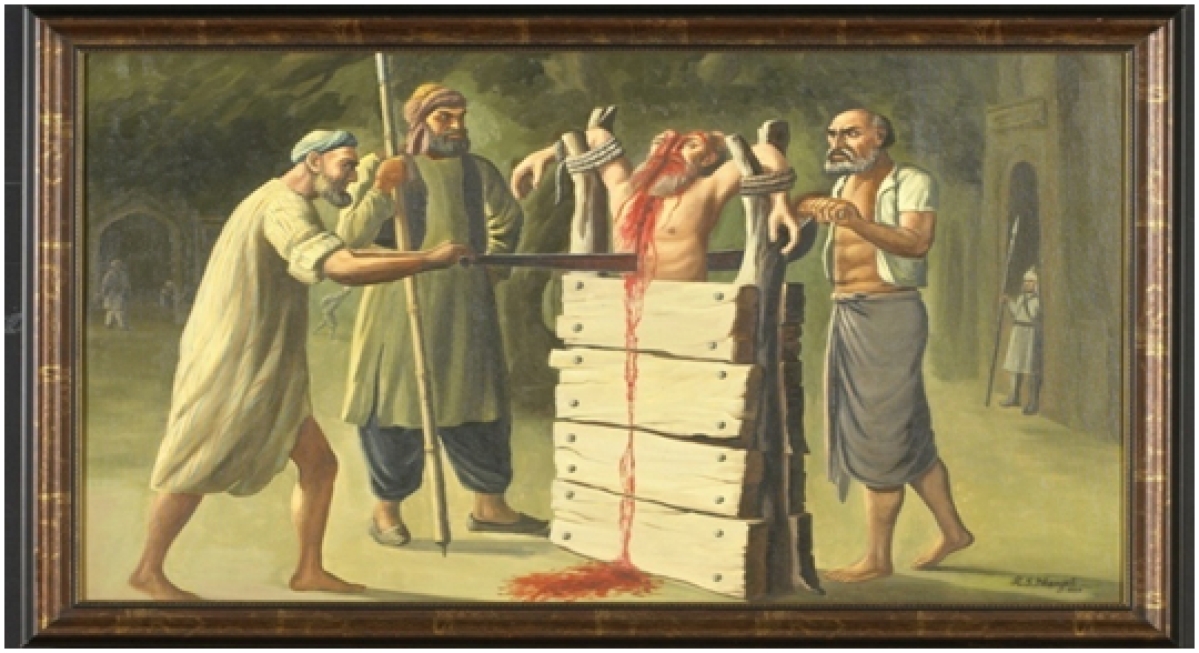 The next to be martyred was Bhai Dayala. They led him to the spot where Bhai Mati Das had been sawn into two and advised him to be wiser. But he too refused to give up his dharma. He was seated in a large vessel, which was then filled with water. Then they lit fire to the wood piled beneath so that the boiling water scalded Bhai Dayala to death. He too kept chanting Guru Nanak’s Japji till he died. 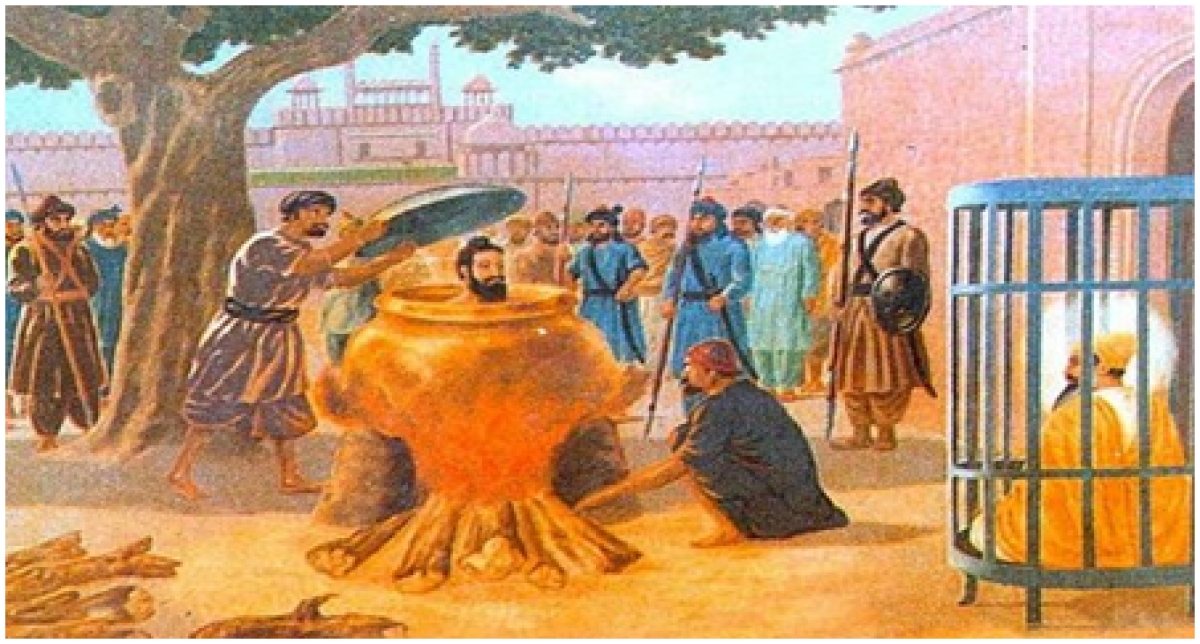 Then came the turn of Bhai Sati Das who also stood firm and refused to denounce his dharma and accept Islam.  Enraged at this, the Qazis ordered that Bhai Sati Das be wrapped in cotton wool, which had been soaked in oil. The cotton was then set afire and he was roasted alive. Even he continued reciting the Japij till his last breath.

Despite witnessing such horrors, Guru Tegh Bahadur did not yield to conversion. So he too was beheaded halaal style in Chandni Chowk on the 24th of November, 1675. His executioner was Jalal-ud-din Jallad, who belonged to the town of Samana in present-day Haryana. The spot of the execution was under a banyan tree (the trunk of the tree and the nearby well, where he bathed, are still preserved). Gurudwara Sis Ganj stands at the site where Guru TeghBahadur was beheaded.

Aurangzeb had ordered that none be allowed to cremate Guru Tegh Bahadur’s mortal remains so that vultures would come feed on them. But at the risk of their own lives, two of Guruji’s devotees defied this farmaan. His head was carried away by Bhai Jaita to Chak Nanaki (later renamed Anandpur Sahib), where the nine-year old Guru Gobind Rai cremated it. His body, which was to be quartered, was stolen by another daring follower, Lakhi Shah Vanjara, under the cover of darkness that descended with a sudden sand storm. He carried it away hidden in his cart under a load of hay. After reaching the head severed body to his modest home at the outskirts of Delhi, he cremated his Guru's remains by setting his entire home on fire. At this spot, the Gurdwara Rakab Ganj Sahib stands today. 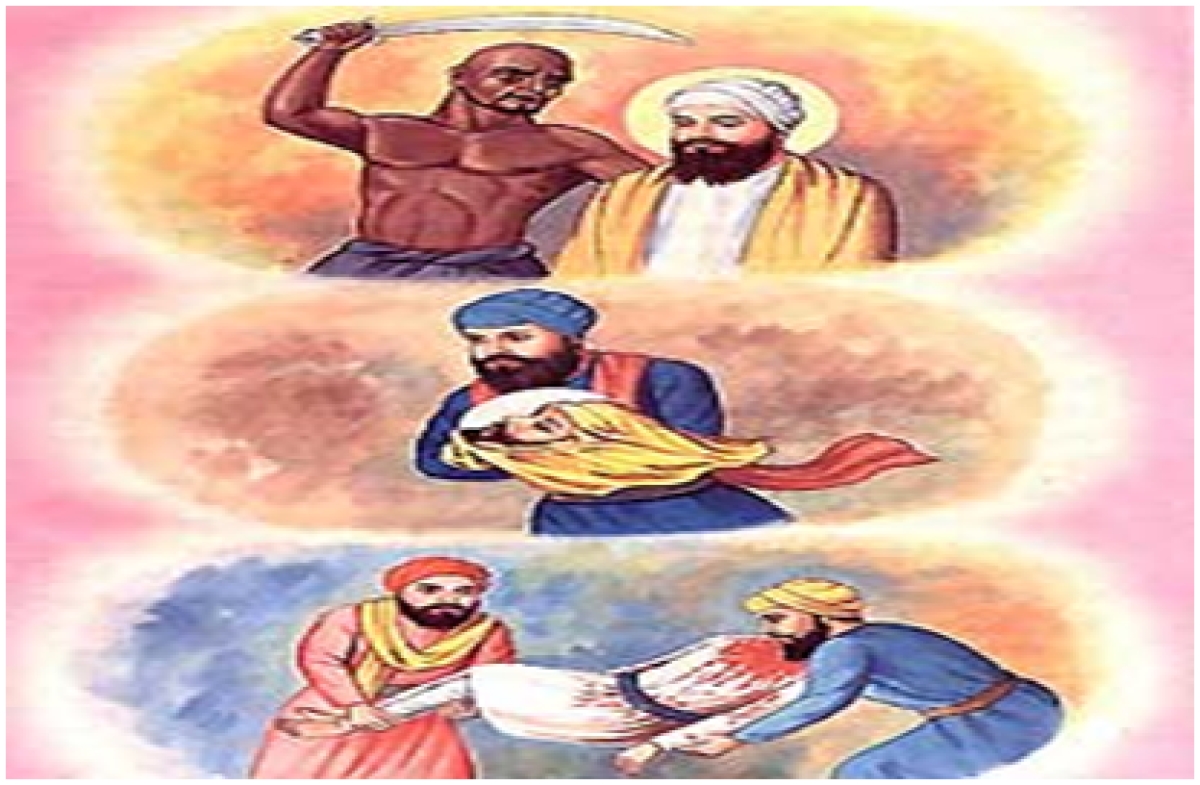 Guru TeghBahadur and his three companions are the most awesome Satyagrahis India has ever produced. Mahatma Gandhi’s satyagraha was baby stuff in comparison. Sadly, during my years as a history student at JNU, I did not once hear the names of Guru TeghBahadur, Guru Govind Singh and others who fought against Islamic tyranny because we were fed on the IrfanHabib-Romila Thapar Schoolof Distoriography. I learnt about the Great Gurus from my parents and by listening to Gurbani. 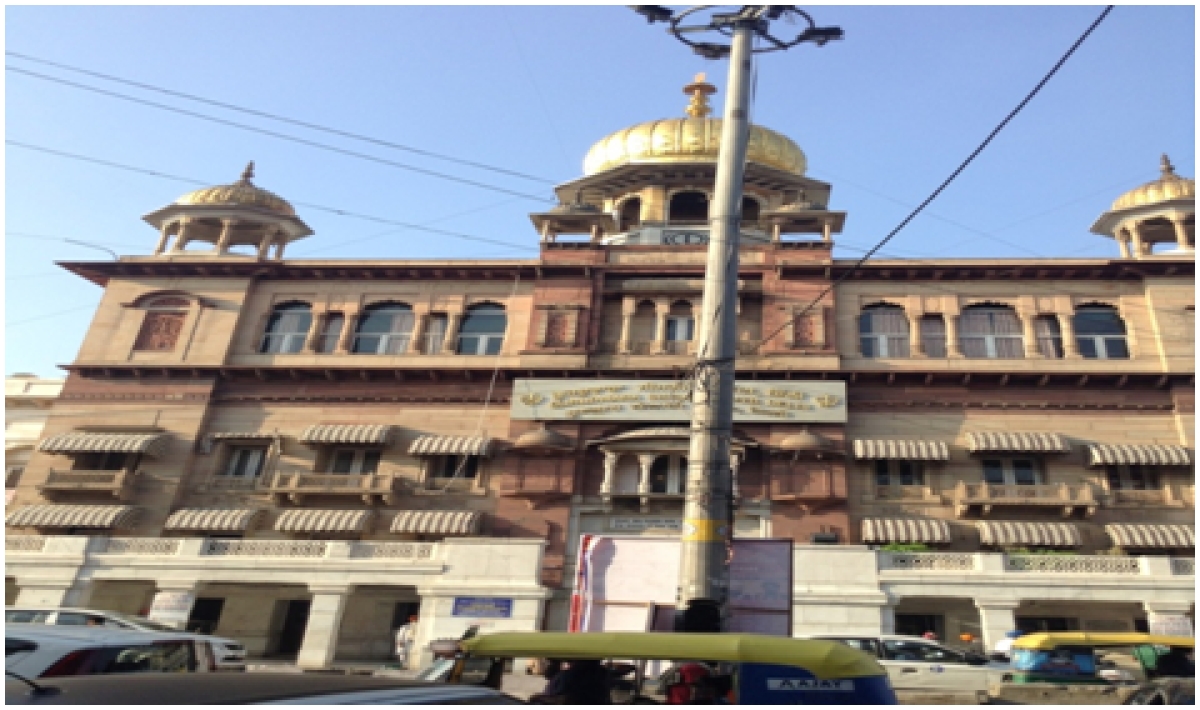 Delhi Tourism does not promote Gurudwara Sis Ganj Sahib as an important landmark, the way it holds up Red Fort as the foremost identity marker of Delhi. Therefore, it is no surprise that the team handling the Chandni Chowk Redevelopment Project has not engaged with the Sis Ganj Gurudwara management to draw up plans to commemorate this sacred site in an appropriate manner. By all means redevelop the area and preserve the Mongol monuments. But don’t gloss over the painful fact that in popular memory (as opposed to Bollywood masalas) this phase of history is remembered as one of religious persecution, forced conversions, destruction and plunder of our temples, rapes and mass abduction of women to turn them into sex slaves.

Some enthusiasts among the Gurudwara management team have erected a very shoddy structure in a make-shift manner on the periphery of the Fountain to commemorate the martyrdom of BhaiMati Das, Bhai Sati Das and Bhai Dayala. Funnily enough, the SGPC has picked up cudgels with the Delhi government to let this crudity remain untouched since it is part of “Sikh heritage”. Sadly, the SGPC is also distorting its own history by pretending that the Chowk was the site of martyrdom when it is mentioned in their own literature that the actual site was the Kotwali. In any case, such a crude structure is an insult to the memory of those great men.

I appeal to Mr Kejriwal and Mr Puri to join together in commemorating the sacred sites associated with these awe inspiring defenders of our dharma as the centerpiece of the Chandni Chowk Redevelopment Programme.  Let party politics not come in the way of your cooperation on this issue. The Fountain Chowk should be renamed as Sis Ganj/Bhai Mati/Sati/Dayala Chowk since it stands between the two historic buildings. 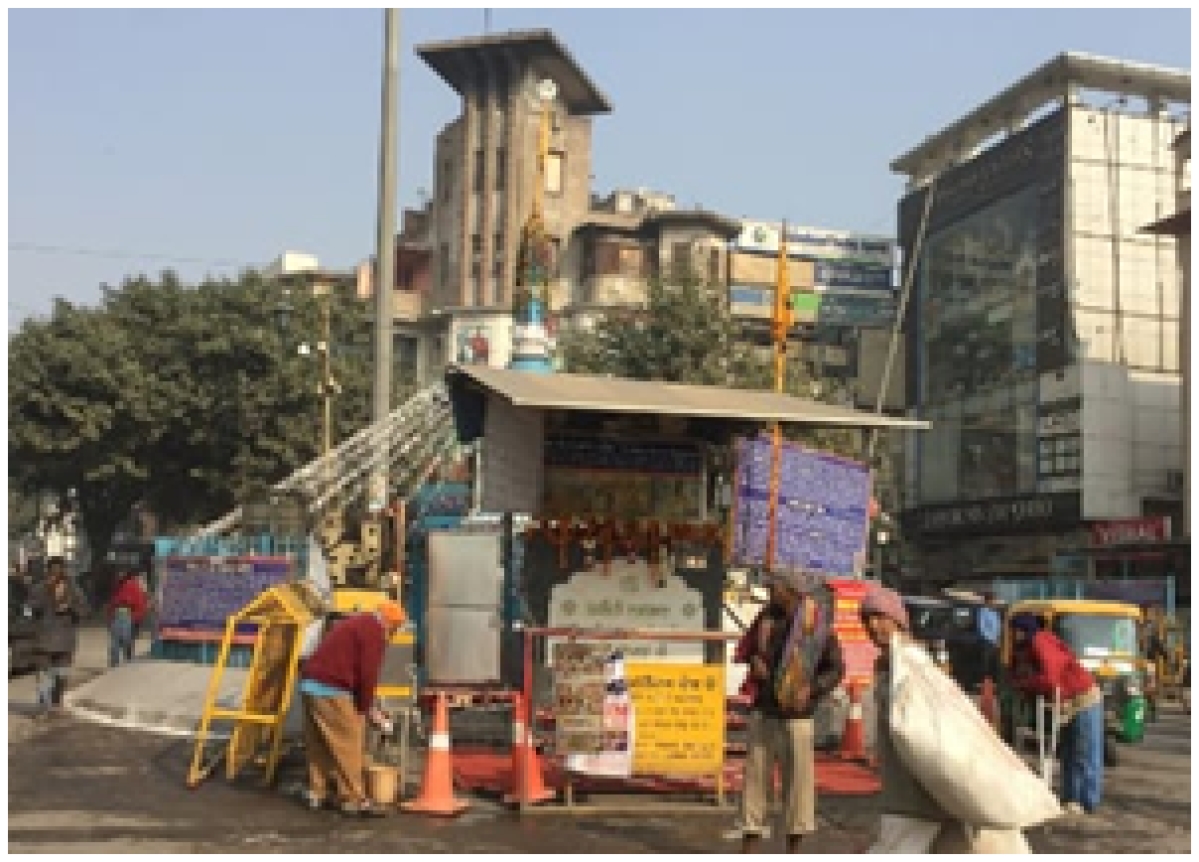 The memorial should be designed in such a manner that it provides a brief history of Sis GanjGurudwara and the BhaiMati Das Memorial in the Chowk itself so that more people are inspired to pay their homage at the historic gurudwara and go visit the Museum which currently lies neglected. In addition, the government should consider converting the Town Hall building into a museum of Delhi’s history – pre-Islamic, post-Islamic, British and post-independence era.  Why are we letting our younger generation grow so ignorant about our past? It is a well-known truism that those who don’t learn from their past are condemned to repeat the very same blunders time and again.

Please watch the video at https://youtu.be/E1a9yPxuTq8

Comments (1)
We welcome your comments

A petition should be started on social media.

The False Foundations of Western Indology

Understanding ‘Narak’: Learning from the Knowledge and Experience of Midwives: Rethinking Pollution

Ministry of Urban Employment and Poverty Alleviation, Government of India

Was PM's Life Endangered by Wilful Security Breach in Punjab?

The Story behind the Success of Rann Utsav

Teaching Pluralism and Tolerance: Building on Our Own Traditions

Of Kunti and Satyawati: Sexually Assertive Women of the Mahabharata

The Potential of Laws Against Domestic Violence

Why One Way Action Against Hate Speech?